In the beginning...there was Buckhorn.

31 years strong in Buckhorn Ontario and coincidentally this is our 31st trek through Felon Falls, Bob Caygen,, past the Big Buck to the Timber Wolf  lodge 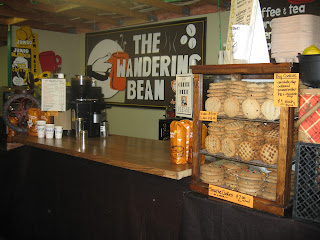 15 years ago The Wandering Bean was all about 'BEANS'

VANILLA BEANS were made into extract, bottled and sold in little bottles, 2 beans in an empty bottle and the recipe tied to the top. Vanilla sugar was a best seller. The sweet smell of the sampler

COCOA BEANS (chocolate!) was bought in blocks i could hardly carry and we learned to temper on a marble slab. thermometer in hand we produced brittles and covered ginger, nuts and spoons

COFFEE BEANS. Initially we covered them in white and dark chocolate and sold them in 1/2lb bags as part of gift baskets

it was the best of times and the worst of times. i had a wee obsession with auctions and believed i could strap vanilla sugar to anything and sell it

i sold a whole school's worth of vintage textbooks.once i sold a ratty silver hairbrush, a British 'fairing', many Pyrex bowls, hundreds of tea cups, hatboxes, eggcups, anything that was in that 50cent box no one else wanted i could make into a basket

just last weekend at the Milton Craft Show two ladies admitted they still have not not unwrapped their baskets because they love the way they look on the counter. they wanted to know why i stopped making them. i stopped over 10 years ago

we knew nothing about coffee back then although I did know how to make a great espresso since i had done a few summers on the patio at Diplomatico in Little Italy. so we found a small second hand Brasilia pour-over espresso machine. the smallest of commercial machines and asked our first show if we could sell coffee

our very first "YES, WE'D LOVE YOU TO SELL COFFEE!!" was from the Buckhorn Community Centre. they had a onsite lunch room but they saw that what we'd be providing would be different. not every show understands that we don't take away from the other food service

specialty coffee is a category all on it's own. no one chooses chip truck coffee. drinking it is an act of desperation. sometimes they substitute tea or hot chocolate and some times still they submit to the small white styrofoam cup, praying for an exception to the rule. the next year they remember to drop by Timmies on the way

it takes us time to change that habit but as our trash fills with Second Cup cups, customers take a chance on a second cup from us. they begin to realize they don't need to search for the nearest Starbucks on the way home and year by year the other cups in our garbage decrease. nice :)

So was born The Wandering Bean Coffee Co.

15 seasons ago Buckhorn Craft Show took a chance on us. we gave away free chocolate covered spoons with every cappuccino. the lines were very long and very patient as we chugged away on our little machine. each spring and each fall we trek up north and that makes this the 31st show we've done in the little hut. trilliums in the forest and hopefully no rain 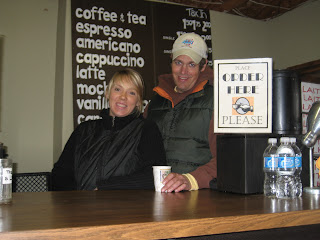 yes. they are real.
EXTRACTS, FLAVOURS and SYRUPS can all be real!
when we started out we made some interesting products to sell along side our coffee. i can't even remember the theme. something about beans. coffee, vanilla, cocoa. who know what we were thinking but one of the first things we produced was vanilla extract. it may have just been an excuse to cross the border for cheap booze. that was the reason we made many decisions back then 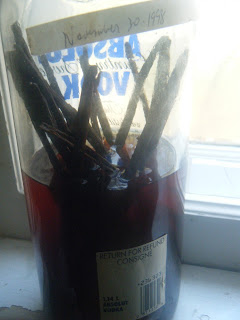 this (sniff sniff) was our first batch. circa 1998

commercial extracts are made with propylene glycol or ethyl alcohol which on their own are very dangerous but in theory they burn off when baking and therefore none is consumed. WHA!!? What about the old fashioned vanilla milkshake, the no bake macaroon or maybe you just take a swig every once in a while? use vodka or alcool! even brandy to add flavour
it's really really easy
but if you still want a vat of chemicals or need to dispose of a body under the guise of Christmas baking online ordering is easy at  propyleneglycoldangers.com

SO...
place bean on the cutting board and grab a very sharp knife 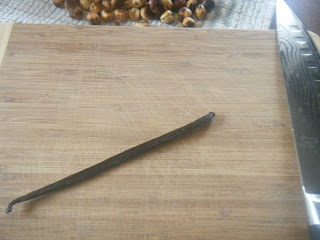 flatten bean out and slice lengthwise with the tip. 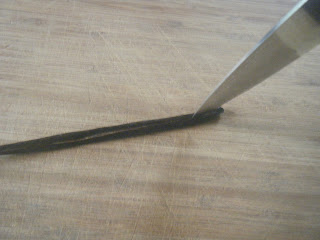 hold one end with your fingertips and pull the knife.
it takes some practice but you can't really screw it up so don't worry 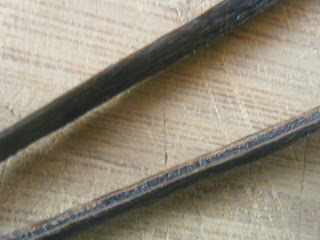 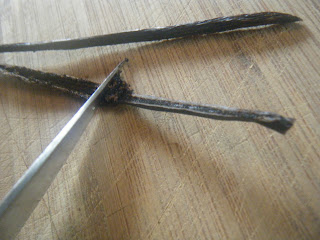 chop the pod up too, it has tons of flavour as well 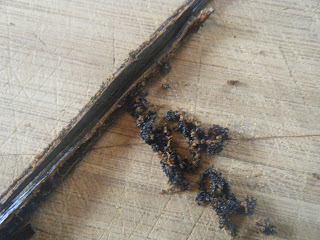 add to your vodka, brandy or alcool. cover and store in a cool dry place out of the sunlight for up to forever but at least 4 weeks to get some flavour in your extract 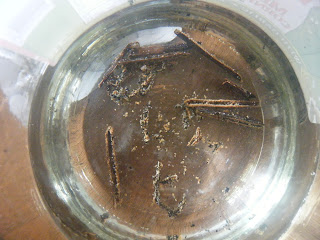 Posted by WANDERING BEAN COFFEE CO. at 07:22 No comments:

I think about bacon drizzled with maple syrup and a black coffee on the side as one of the best flavour combinations so why not try and put them all in one cup? 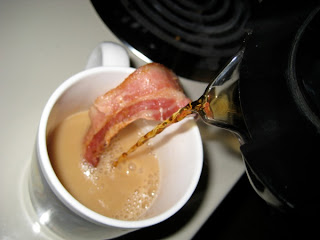 puttingweirdthingsincoffee blog makes me laugh and he's never quite wrong but I did it
more like this... 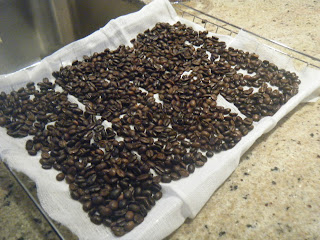 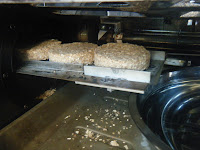 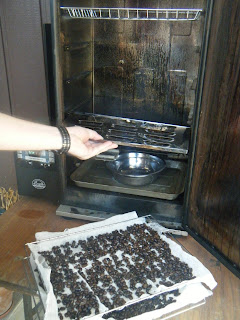 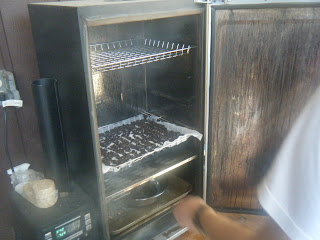 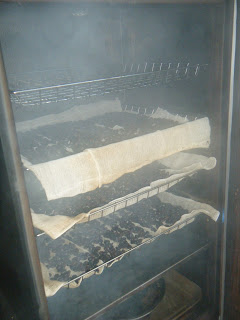 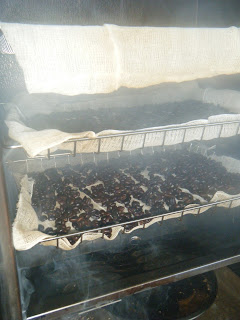 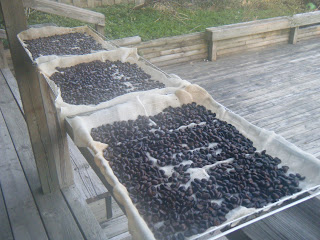 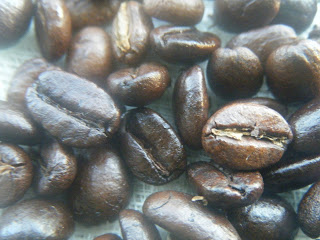 wandering bean POP-UP will be sampling at our next event. Keep an eye our for the Woodie 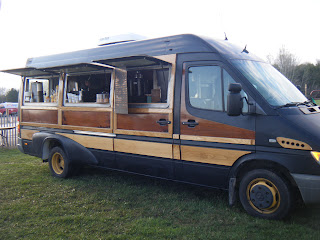 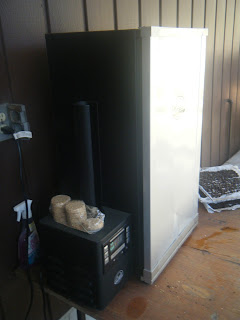 Posted by WANDERING BEAN COFFEE CO. at 12:18 No comments:

we were topless again!
first time was Queen West Art Crawl
but no one cared
we said it was our environmental initiative to
reduce waste
really we just forgot to pack the lids.
but in small town Ontario
they don't like it when you're topless
people tuned away in horror
we only forgot the large so everyone downsized to medium
it was like saying goodbye to $1 with every cappuccino
it hurt our bottom line.

but these things happen and you can't let it get you down
we forgot our tent joints once
hate to admit this but the solution was to purchase a
new tent form Costco
return it on Monday.
we forgot the tamp a few times
used the bottom of a stainless espresso tumbler.
forgot the decaf beans a million times.
sorry no decaf.
forgot medium cups so we just filled the large ones up 3/4 of the way.
often forget the mashmellows.
who cares. have whipcream
you get the idea

There really was a topless coffee shop though,
Grand View TOPLESS Coffee Shop

Posted by WANDERING BEAN COFFEE CO. at 08:22 No comments:

do you enjoy day-trips to the country?
do you like outdoor learning experiences?
do you pick-your-own strawberries and cut your own Christmas tree?
are you coming to Elmira tomorrow?
yes? then YOU are truly an AGRI-TOURIST!

you're most likely female, 35-50yrs old and have a pretty good income. you enjoy spending time with your 2 or more kids and spouse outside the big city because it's an affordable get away and educational plus you had to go grocery shopping anyway!


Grab a WANDERING BEAN COFFEE!
will be the first booth to greet you at the south end of Arthur St.
with piping hot fresh roasted coffee.
OPEN at 6am (ugh) 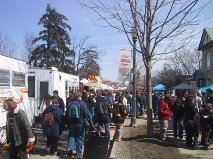 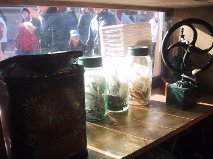 Posted by WANDERING BEAN COFFEE CO. at 11:12 No comments:


Posted by WANDERING BEAN COFFEE CO. at 07:45 No comments:

DO NOT contact "The Wandering Bean" for your event in Mississauga. they won't be able to make it. parade in Peterborough? nope. too far. outdoor festival to celebrate Canada Day....sorry they're not interested.

there is another wandering bean on the other side of the world!! fair dinkum, mates!! WHAT'S GOING ON HERE??!!

Aussie Twin? Down Under Doppelganger?

Let me set you straight...

THEY are "THE WANDERING BEAN" 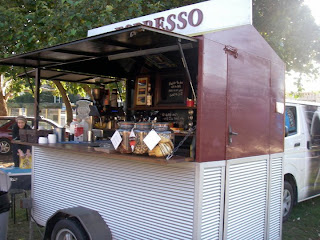 WE are the "WANDERING BEAN COFFEE" Co. 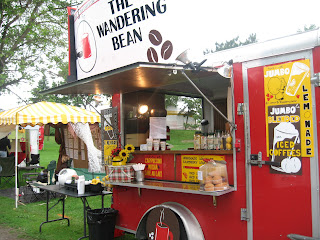 
WE BOTH HAVE:
COLE in Canada and NOAH in Australia 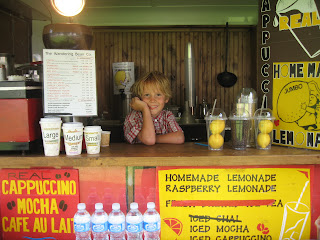 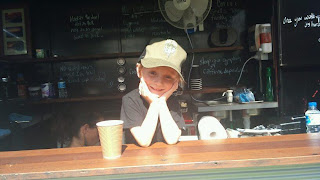 BROTHERS from another Motherland?

Posted by WANDERING BEAN COFFEE CO. at 12:34 No comments:

Tell me I can't do it. That inspires me.

Starbucks and their many look a likes...you counter- inspire me. Thank-you.

US:
1. Atmosphere. find us in a field with an airshow overhead.
2. Color scheme. red, yellow, orange and white with hints of stainless
3. Auditory signature. Stompin Tom to the New York Dolls. funk anyone?
4. Lighting. the sun
5. Pace. driven by caffeine
6. Product names. small medium large Canadiano and a Toronto Fog too

It's not a lifestyle, it's just good coffee. 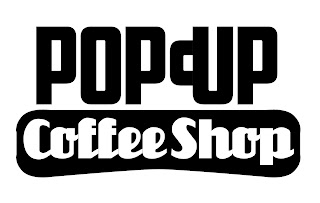 Posted by WANDERING BEAN COFFEE CO. at 07:54 No comments:

IS THE COFFEE GOOD? FU

ok maybe i should leave out the FU but

"Is the coffee good?" this question tells me two things about you

number TWO is that you've falsely assumed i would be a disloyal employee. one that would lean across the counter and whisper 'don't bother' with a wink.

luckily i am self employed and after an appropriate amount of blank stare, i simply say "Yes"

that's on a good day

"Is the coffee fresh?" ...well you just watched me bound into the trailer to retrieve 4 new pots of coffee like an Oktoberfest barmaid and before i could even transfer them into a thermos you watched me pour 7 cups of piping hot coffee for the people in front of you."DID YOU JUST ASK IF THE COFFEE IS FRESH??" i ask you. staff begin to laugh nervously, everyone in line behind you looks at their feet

i'm sure at this point it all comes to you like one of those pinhole cameras ....you smell the right smell, you see the pot steaming, you hear the grinder grinding and out of the corner of you eye you now even notice the people at the service bar smiling and nodding. but it's too late. you asked

is it because i don't have a giant banner that say FRESH HOT COFFEE?? or coffee bean graphics wrapped around my trailer? Espresso flags flying? logo-ed shirts and matching visor?

i TRULY BELIEVE i have given you all the RIGHT clues though. just look around

other questions i've enjoyed over the years;

Is there something special about your coffee?
Should i get a coffee here or at that other place?
Will it be as good as the coffee i had in Italy?

sorry i was so rude

windy but not too cold. perfect 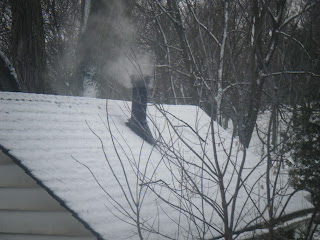 Posted by WANDERING BEAN COFFEE CO. at 08:02 No comments: